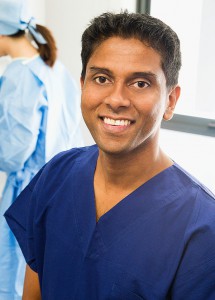 Furthering his career and his aim to be a specialist surgeon he went on to do 4 years of fellowship in bariatric, upper gastrointestinal and advanced biliary surgery. He chose to do 3 of the 4 years of his specialisation in Melbourne (Western hospital, Alfred hospital & St Vincents Melbourne). This has helped him become well abreast of the demographics of the disease process that is specific to our population.

In addition he has also completed the Australian New Zealand Gastro-Oesophageal Surgery Association (ANZGOSA) training program and satisfied the standards of the Gastroenterological Society of Australia for gastroscopy and colonoscopy.

He has been an invited speaker at the Upper Gastrointestinal section of the Royal Australasian College of Surgeons Annual scientific Congress in Singapore in 2014 on the topic of Anti-reflux Surgery “Which Wrap & When”.

He is currently a reviewer for the the Obesity Surgery journal.

Mr Niruben Rajasagaram is committed to providing a standard of excellence in his service to his patients and the community.